Today I am going to do a book review on ”Dork Diaries Tales From A Not So Happy Heartbreaker”. It is written by Rachel Renée Russell. It is a very funny and good story.

It is about a girl named Nikki and her two best friends Chloe and Zoey. The story is about a dance called sweetheart dance and Nikki wants to go with her crush Brandon. On the other side Chloe and Zoey really wanted to go to the dance also but they didn’t know who to go with. Nikki was kind enough to buy tickets but they were all sold out. The three best friends went in the janitors closet to discuss. She found out that they both bought tickets for Nikki and themselves.  Zoey and Chloe didn’t have a dress to wear so they planned that they would all wear garbage bag dresses with crazy sunglasses but Nikki already bought a dress. Nikki also, had to help out her little sister Brianna with her ballet club. She had to wear a rat suit. So Nikki had to be in two places at once. The ballet party and the dance. Nikki had a plan to get out of the ballet party. Every hour she went to the bathroom and sneaked out the the sweetheart dance. She brought her bag to put all of her stuff. Then she hanged out with her BFF’S and told Brandon that she was in the bathroom and then she hanged out with him for a while.

Here is the cover of the book: 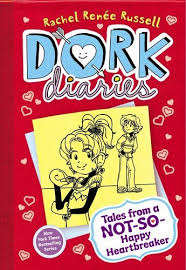